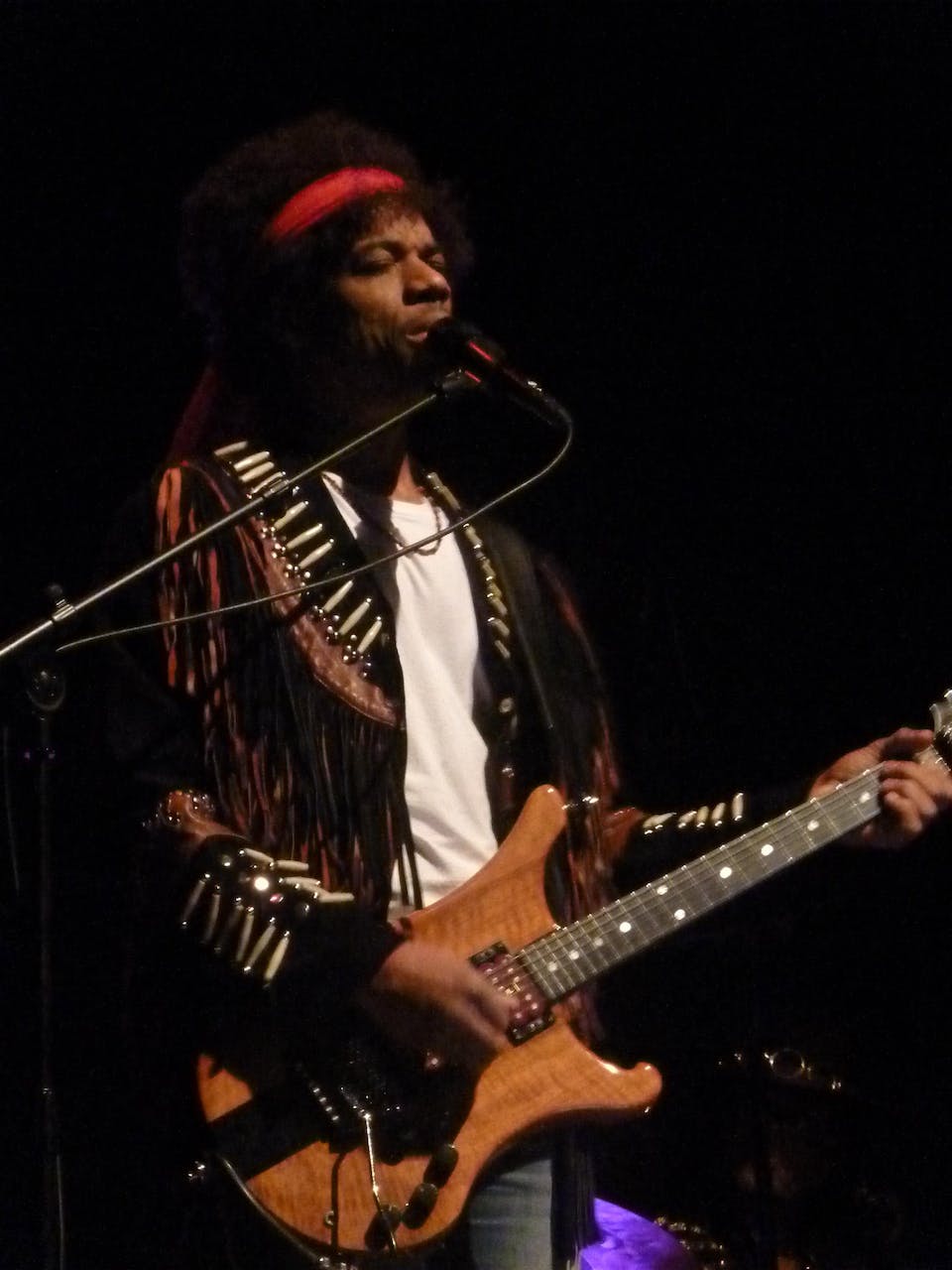 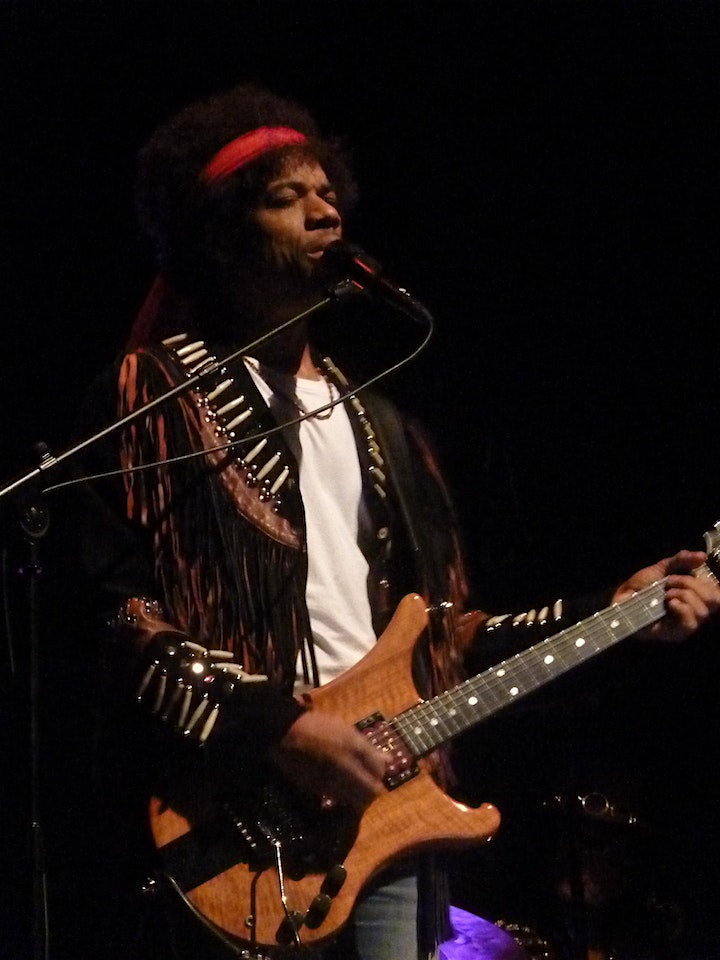 World-renowned guitarist Stanley Jordan has developed a new live show called “Stanley Jordan Plays Jimi.” This is a tribute show, but it’s not pure imitation. Instead Stanley builds on Jimi’s legacy in a creative way. As Stanley explains it, “This is my fantasy Jimi Hendrix concert if Jimi were still alive and playing today. By re-imagining his music and channeling his persona I try to bring that fantasy to life.”

It may be surprising that Stanley Jordan would take on a project like this. After all, Stanley is already a well-known guitarist with a signature style, four Grammy nominations, a cameo in a Blake Edwards film (Blind Date), and a host of TV appearances over a long career including Jimmy Fallon, David Letterman, Jay Leno and Johnny Carson to name a few. But Stanley explains, “I feel a strong connection to Jimi Hendrix because he was the first guitarist I emulated as a child. Out of love for Jimi and his music I feel a strong desire to try to keep his legacy alive.”

It may also be surprising that a rock legend like Hendrix would get so much love from a jazz legend like Jordan. Stanley’s 1985 album Magic Touch was #1 on Billboard’s jazz chart for 51 weeks, and Stanley has shared the stage or recorded with jazz artists such as Benny Carter, Dizzy Gillespie, Miles Davis and Billy Cobham. But again, hearing it from Stanley, “I actually played rock and blues before I played jazz. In fact, Jimi’s constant searching for new sounds inspired me to move toward jazz in the first place.”

In recent years Stanley has performed with many artists in the rock and jam band worlds, including the Dave Matthews Band, Umphrey’s McGee, Moe. and more. Stanley says, “Returning to my rock roots has been an absolute joy artistically, and with this project I’m taking that to a new level.”

Another important aspect is the embodiment of Jimi’s persona. Stanley actually steps onto the stage as Jimi Hendrix so there is a theatrical element to the show. But this is not a comedic caricature nor is it a theatrical play – it’s a concert. It’s a concert built upon a sincere and heartfelt effort to recreate the jaw-dropping experience of witnessing Jimi Hendrix live while at the same time bringing Jimi’s legacy up to date in a believable way. Wow! Tall order to fill–no? That’s why you need a world-class artist of Stanley Jordan’s caliber to pull it off.

This extra touch of portraying the Hendrix of today rather then yesterday keeps the show creative and fresh for both Stanley and the audience and it gives Stanley’s fans a new insight into Stanley’s own evolution. It also makes the show more authentic in a certain sense, because a real Hendrix concert would have surprises and unexpected turns. “Stanley Jordan Plays Jimi” tries to re-create both the energy and the creativity of the real thing.

“This would be a challenging endeavor for anyone,” Stanley explains. “For sure you can put on an impressive show with just 2 or 3 of his techniques. But I’m trying my best to cover as much of his work as possible while at the same time trying to build on it, which I think is really the heart and soul of this project. The truth is, no one really knows what Jimi would be doing today. But we do know he would have kept evolving. This gives me some creative leeway and it lets my own identity come through because we’re viewing Hendrix thru my lens. But it’s also challenging for me because I can’t do just anything; It has to make sense and to come across as something Jimi might have actually done.”

One way Stanley builds on Jimi’s legacy is by expanding on some of the jazz elements that Jimi was evidently reaching for toward the end of his life. Stanley says, “We know that he jammed with Rasaan Roland Kirk and Larry Young, and plans were underway to collaborate with Miles Davis and Gil Evans. You can hear him reaching and expanding his vocabulary on albums like Nine To The Universe, which was very influential to me as a youngster. And some of his compositions have a kind of jazzy shuffle, such as ‘Up from the Skies’ and ‘Belly Button Window.’ I try to expand on that.”

Stanley also builds on Jimi’s work by incorporating touch, or two-hand tapping techniques. Many people associate that more with Van Halen than with Hendrix but Stanley says, “I actually got the idea from Jimi Hendrix. I saw him do it with just his left hand, but that’s all I needed to see. I just added the right hand, which was an obvious extension.” And extend it he did. Today Stanley Jordan is considered by many to be the World’s best tapper, having developed it into a rich pianistic style.

Jimi Hendrix was no stranger to electronics and Stanley builds on that as well, saying, “Of course I use feedback and effects just as Jimi did. But I avoid programmed sequencers and prerecorded tracks because there just isn’t enough evidence that Jimi would have gone that route. And the real genius of what he did consisted in making himself part of the circuit rather than externalizing it. For Jimi, electronics were not an end in themselves but a means to an end–an extension of the instrument and a channel of his spirit.”

Stanley also adds a few original compositions to the setlist–fantasy songs that could have been written by Jimi today, just to fill out the repertoire and to give shape to some of the new concepts Jimi was developing. Remember–this is the Hendrix of today, not yesterday.

In terms of look and style, Stanley stays mostly faithful to Jimi’s traditional style. Of course we know Jimi could have evolved significantly in his clothing style by now but Stanley doesn’t speculate much in that area, explaining, “The truth is, in this show I’m both a musician and an actor, and I want my character to be believable. I feel that the best way to do that is to be fairly faithful to the Jimi Hendrix that we all know.”

“Stanley Jordan Plays Jimi” is a new project but it’s based on an old idea. Stanley says, “Back in 1970 at the age of 11 I was saddened to hear of Jimi’s passing. I decided there and then to try to continue his legacy, so I took up guitar. Of course my main goal was to be an original artist in my own right, but the concept of a Hendrix tribute has been in my mind pretty much from the start. Now, in the year of the 50th anniversary of Jimi’s historic Woodstock performance the time feels right to bring this idea to fruition.”

Bassist Gary Kelly is no stranger to the music and times of Jimi Hendrix. As a bassist he has worked with many well-known artists from the 60’s and beyond. He has performed with The Mamas and Papas, Jimmy Buffet, and Martha and the Vandellas. He has also performed with many widely known guitarists: Stanley Jordan, Bill Frisell, Mike Stern, Larry Mitchell, Popa Chubby, and Rhett Tyler to name a few. Many of these were in the classic guitar trio format, with extensive improvisation. Gary has spent many years working in recording studios. He had the good fortune to work at Electric Lady Studios (the studio Jimi Hendrix built) for many years as an in-house session bassist. He worked with Chief Engineer Dave Wittman, co-producing Gary’s first recording Dean Street, as well as work for guitarist Karl Cochran. Gary has been a long-time endorser for Hartke Amplifiers, D’Addario Strings, and Carl Thompson basses, and has done many clinic/concerts.

Kenwood Dennard is the perfect drummer for this band because he combines the deep pocket of Buddy Miles with the jazzy embellishments of Mitch Mitchell. And he knows Jimi’s music inside and out. He is a professor at Berklee College of Music where he has been leading the Jimi Hendrix Ensemble for 20 years.

Kenwood is also well known as a pioneer of mastering simultaneous multi instrumental live performance, playing 2 keyboards, drums and singing all at once, what he refers to as Pansonic Coordination. He says,“After playing with Pat Martino and Brand X, I decided to concentrate on developing the MRO. My first concert was in 1979, where I played three keyboards and drums at the same time. I eventually developed it to the point where I could play eight ostinatos at the same time, and that led to playing all the parts of a song where I could sound like an entire band."