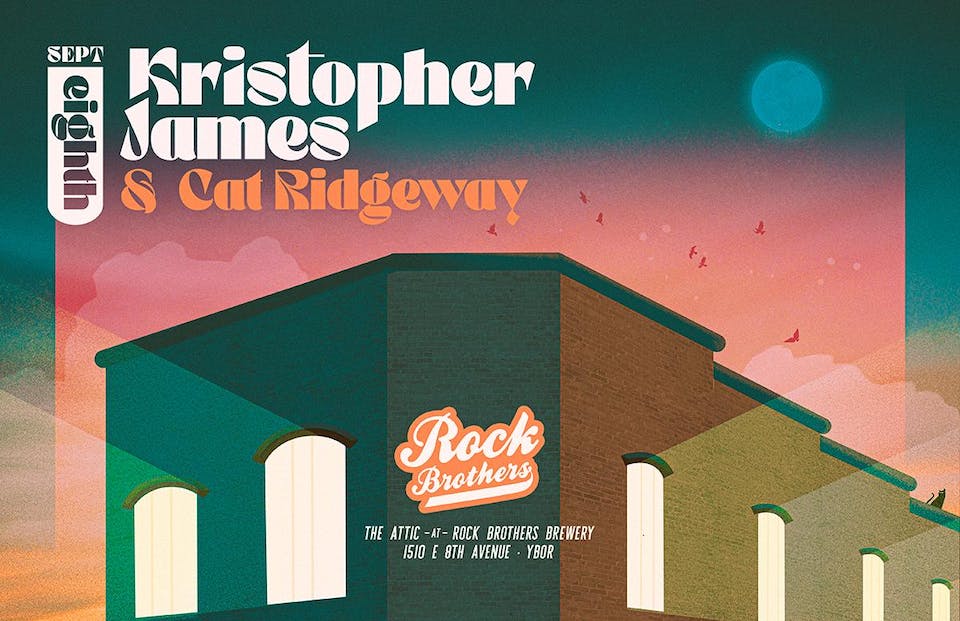 A Florida born Americana/Soul songwriter and performer, Kristopher James, can synchronously transition from crooningly elegant falsetto to soaring soulful bellows – as his vocals and melody shine in the spotlight of the stage.

In 2019, Kristopher released his genre-arching full length, “Kindness Never Quits”, that rooted him as one of the most soulful voices in the South East – ushering him into position, to support acts, such as Marc Broussard, David Ryan Harris, Laura Reed, Kyshona Armstrong and so many more.

James takes perhaps his most profound steps, recognizing the fragility of life, in making this year one of intention and attention – Solidifying his path in a courteous stride of soulful southern R&B impressions, on stage: with rousing guitars, swoonful keys and in-pocket rhythms – as well as off stage: with sincere stories, and recognition of how important community is to our continued growth.

Cat Ridgeway is a skilled singer/songwriter and multi-instrumentalist from Orlando, FL known for her soulful vocals, high energy, and magnetic stage presence. Her 2020 release, ‘Nice to Meet You,’ marked her debut as a fully independent artist to commercial radio and brought her and her band on tour. The record jumped up 59 spots to #66 on the Americana charts, and her leading single “Giving You Up” tied for the #5 most-added Americana single nationally. While these numbers may seem humble, they are quite impressive for an independent artist pitching to commercial radio for the very first time.

After seeing her live, Cat caught the attention of hit songwriter Shawn Mullins (known for his 1998 chart-topper “Lullaby”). The two have become fast friends and since played many shows together and become collaborative partners (their first joint single “Give Me Love” has received critical acclaim and broken into both the top 100 AAA and Americana singles charts). Shawn also featured Cat on his (virtual) Cayamo Cruise Variety Show.

Cat has played many notable stages (30A Songwriters Festival, Okeechobee Music and Arts Fest, and House of Blues Orlando), sharing bills with acts such as Arcade Fire, Leon Bridges, Brandi Carlile, Jason Isbell, the Indigo Girls, and Rock & Roll Hall-of-Famer Marty Balin (Jefferson Airplane/Starship). She most recently opened for Mac McAnally of Jimmy Buffett’s Coral Reefer Band (who’s written hits for Kenny Chesney, Alabama, and many others) and was met with great reception from him and his whole team. Additionally, indie rock duo Tegan and Sara personally selected Cat as the winner of their worldwide cover contest after being impressed by her prowess across 5 different instruments. Furthermore, Cat has been voted one of Orlando’s Best Singer/Songwriters, and her band has been named one of the city’s Best Rock Acts and Best Soul Acts by local music lovers.

Aside from her own songs getting airplay, Cat is also highly sought after to record radio jingles and has lent her voice to many notable causes including Tunes for Tots, Make a Wish Foundation, and Hospice of the Comforter. Her song “Drift” was licensed by Nemour’s Children’s Health Systems for a national commercial.

Cat has a contagious smile, unmatched work ethic, and voice much bigger than she is. Anywhere she plays, a buzz is sure to follow.