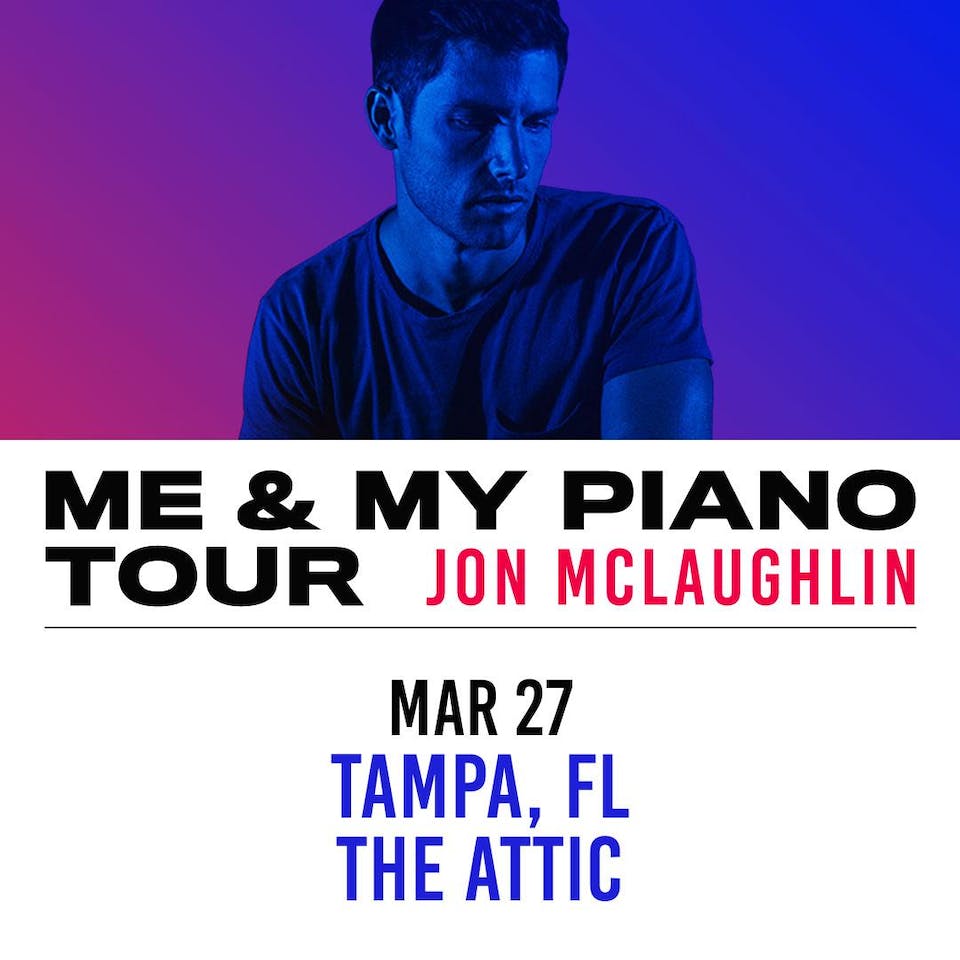 PREVIOUSLY PURCHASED TICKETS ARE VALID FOR THIS EVENT

Jon McLaughlin live at The Attic

Everything in Jon McLaughlin’s life makes its way into his music, whether he’s conscious of it or not. The artist, raised in Indiana and based in Nashville, brings all of his experiences and beliefs into each song he creates, something that is especially true now that he’s the father of two young girls.

Jon released his debut album, Indiana, in 2007 on Island Def Jam, attracting fans with his heartfelt, hook-laden songwriting and impassioned delivery. He’s released six full-lengths in the years since and revealed a true evolution in both his piano playing and singing. He’s played shows with Billy Joel, Kelly Clarkson and Adele, collaborated with longtime friend Sara Bareilles, co-written with Demi Lovato and even performed at the Academy Awards in 2008.

Jon’s album, Like Us, dropped in October of 2015 via Razor & Tie, and he spent the past few years touring extensively before heading back into his Nashville studio to work on new music. Jon released a Christmas EP in 2017 titled Red & Green with two originals and his take on a few holiday classics. In November of 2018 Jon released his album Angst & Grace which features “Still My Girl” written for his youngest daughter.

Another project started in 2018 is his Dueling Pianos video series. Every episode features a new guest artist and they perform mashups of never been heard arrangements.

In Fall of 2019 Jon is released an instrumental piano album titled Mood. This record demonstrates Jon's artistry and captivates his talent as a pianist.

As with everything he does, Jon’s goal is to create connections. He wants to translate his experiences and ideas into music that reaches fans everywhere. His passion for music and playing is evident in each note he plays. 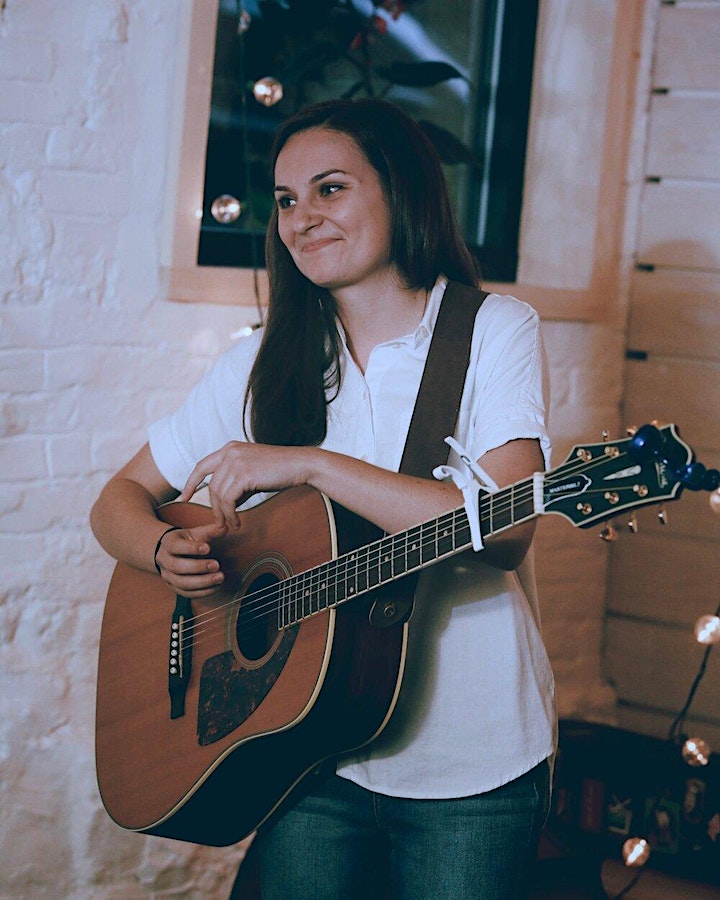 When you hear Marielle Kraft’s music or experience her candid live shows, you feel as though you already know her. The indie pop singer/songwriter, now based in Nashville, displays craftsmanship beyond her years, following suit to artists like Shawn Mendes, Maisie Peters, and Taylor Swift.

Self-taught, the Rhode Island native began playing guitar at 16 and soon writing songs that strike chords with listeners everywhere. Her gift for storytelling is evident through her use of salient detail, raw emotion, and poignant word choice to describe moments “exactly as they feel.”

Over the past few years, Marielle Kraft has self-released one original EP, seven singles, and four official music videos.

Kraft’s 2017 debut single, "How Far You Feel," has collected nearly half a million streams across platforms. The indie pop breakout track seeks to understand the dichotomy of physical vs. emotional distance in relationships, brilliantly expressing “what many feel but cannot find the right words to say.”

Marielle’s 2018 single, “Test Drive,” was the first on her debut EP, followed by a second release in February 2019: “Toothbrush.” This fan-favorite soft pop tune was coupled with a brilliantly creative lyric video comprised of 50 fans singing along to her lyrics using custom Marielle Kraft toothbrushes.

Kraft’s third EP single, “Better Without You,” arrived on May 17th, 2019 across platforms. This “standout track” reaches new heights in pop production and lyrical construction. Premiering on GroundSounds, the bicoastal music blog raves of the sparkling single, “The song shows Kraft’s big-time pop sensibilities. It’s addicting, charming, and shows why she’s a name to watch this year.”

Each of these three singles culminated as Marielle Kraft’s debut studio EP, “The Deep End.” Officially released on July 12th, 2019 Kraft’s first effort is notably strong both lyrically and sonically, described by The Music Mermaid as “song after song of mini pop addictions.”

Kraft’s EP release was directly followed by her first headlining east coast tour. Her “winning personality,” “genuine connection",” and “gift for story telling” on stage have fueled the ever-growing crowds at each of her shows, with no signs of slowing down.

In February 2020, Marielle Kraft co-released an “anthemic” and “heart-filled” single with Joshua Howard entitled “In It Together”, which has quickly gained support across platforms.

Marielle Kraft regularly plays at venues across the United States, sharing stages with names as big as Jon McLaughlin, Ava Max, and Betty Who. She presents her live shows as a seamless narrative: evocative yet encouraging, deeply reflective yet refreshing. The raw authenticity with which Marielle invites listeners into her story cultivates a relationship with them beyond the song, as she is known to “bring together a room full of strangers.”

In spring 2018, she was crowned Grand Champion of the Mid-Atlantic Singer-Songwriter Competition, and the following June she delivered a Tedx Talk at Firefly 2018, discussing the importance of honesty rooted in her songwriting process.

Marielle Kraft’s October 23rd single, “Portland,” breathtakingly captures the moment we find ourselves in, and speaks volumes of the young artist’s songwriting abilities.

Without missing a beat, Marielle Kraft released back to back singles to kick off 2021, both of which found major traction on Tiktok before becoming fully studio produced releases. “Everyone But Me” (February 19th) and “We Were Never Friends” (March 24th) feature a more developed sound than seen from Marielle before, and have cultivated her biggest streaming debuts to date. With more new releases on the way, Kraft is on track for an even bigger 2021.

Since leaving her full-time teaching career to pursue a life committed to creating music, Marielle Kraft has promise to follow suit to artists like Julia Michaels and Maisie Peters as the young songwriter makes a growing impact in the indie pop scene.

“Marielle has this admirable ability to translate the world’s unique, and shared, experiences into sweet, profound little tracks that are somehow always exactly what we need at the time.” - The Music Mermaid

“If you like indie-pop with singer/songwriter flair then it’s a must-hear. The songs from the EP sounded even better performed with a whole band in the live setting…they sounded fuller and had an extra dose of vibrancy.” - Love Is Pop

“‘Better Without You’ stands out on the EP and is the perfect breakup / female empowerment song.” - Rock On Philly

“Marielle Kraft finds vulnerability as the avenue to joy, light, and truth, as is rooted in each of her indie-pop songs. Marielle knows who she is, and that comes across so strongly in her music.” - The Narrative Now Podcast

“With each passing second, we allow ourselves to fall more deeply into this incredible soundscape.” - Imperfect Fifth

“Marielle showed a clever intensity in her material that, when coupled with her wonderful voice, pulled the listener into her story.” - Joe Trainor, Gable Music Ventures