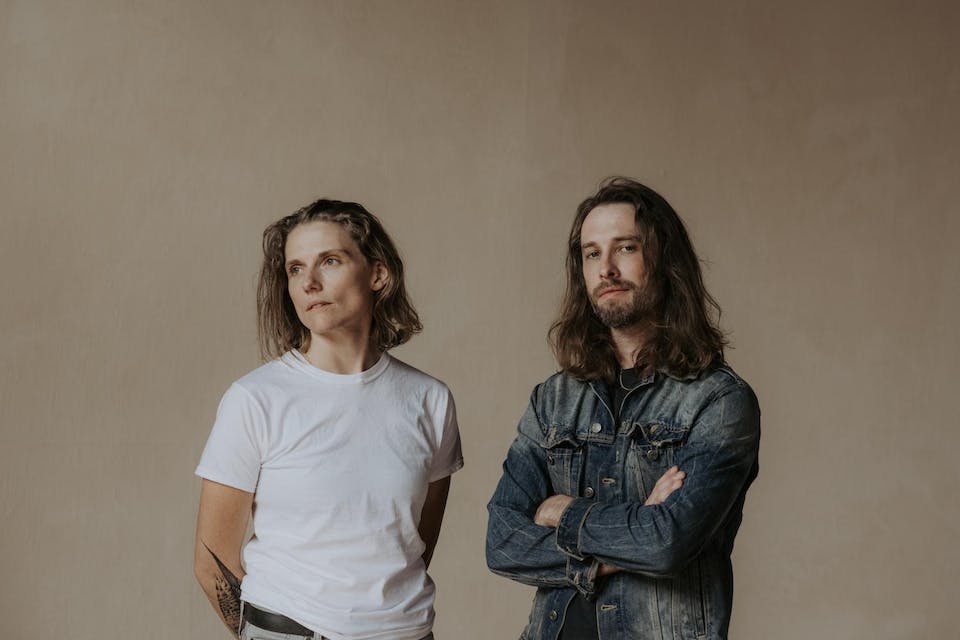 Dead Horses at The Attic

Dead Horses isn’t a band in the conventional sense. Rather, it’s an intimate, folk-inspired conversation between two close friends. At its core, the participants are guitarist/singer Sarah Vos and bassist Daniel Wolff. The Milwaukee, Wisconsin-based pair’s musicality, emotionality, and ambitions have sent them on a winding journey in music.

Today, the dialogue continues with an upcoming five-song EP, out February 7th, to be preceded by three singles and supported by a six-week tour.

“There is a lot vulnerability in what we do,” Dan acknowledges. “We share in this very personal expression, and we have a common bond in our personal goals.” Sarah adds: "We are both running towards this dream of doing what we love-recording music and touring-even when the outcomes are uncertain."

Dead Horses weave together a patchwork of classic and contemporary influences that span trad roots, indie-folk, and other experimental musical idioms. In its artistic continuum, Dead Horses has explored freeform musicality and thoroughly composed approaches. Thematically, the songs are personal, revelatory, and relatable, brimming with imaginative phrases, poetry, vulnerability, and a feeling of redemption.

Dead Horses is something of a fluid project centered around Sarah and Dan but throughout the years has welcomed other like-minded musicians for recording and touring. The band's name is a loving tribute to a former friend of the band who passed away due to struggles with opioid abuse. To this end, Sarah says: “Our music is about hope and joy, and sharing a message that you’re never alone.”

Along the way, Dead Horses has charted on the Americana Top 50 radio charts for three months, accrued over 20 million spins on Spotify for the single “Turntable” which was also featured on Amazon and Apple “Americana”playlists. The pair’s select press highlights include a Rolling Stone "Artist You Should Know" mention, and profiles in Billboard, Noisey, and even Democracy Now!

Touring has been essential to the group’s vitality, and these days Dan and Sarah average 120 dates per year. Choice live performance highlights include national tours with Mandolin Orange, Tramped by Turtles, opening for The Who, and appearances at Red Rocks Amphitheater, and at festivals such as Northwest String Summit, Red Wing Roots, Red Ants Pants, and Bristol Rhythm and Roots.

Sarah and Dan met during post-college crossroads moments. “Everything felt like this blank canvas back then, and we had these lifelong dreams of music,” Sarah recalls. “It all happened organically.”

Initially, the two resided in different musical spheres. Sarah was coming from a singer-songwriter vantage point; Dan had previously played in punk bands; but the two bonded over folk music and a shared upbringing in the church.

During those formative times, Sarah showed Dan songs she had been writing since high school. Inspired by her catalog of music, Dan decided to take on a new instrument, the upright bass, and set out to explore its melodic possibilities. Once together, the pair wasted no time in pursuing recording and touring opportunities, garnering a dedicated fanbase from the start.

Dead Horses’ latest release will be a trio of singles that will be bundled with two other songs and released as a five-song EP. The plan to release a series of singles allows the duo to express a more eclectic side of its personality, and not be tied to notions of long-player cohesion. In keeping with this experimental spirit, Dan and Sarah also opted to self-produce these tracks.

With these five tracks, Dead Horses showcase different facets of its creativity. On the single “Family Tapes” an essentialized folk tune is delicately textured by harmony vocals and bowed double bass. The song’s evocative title is literal and explores how family memories were captured previous to the days of heavily curated and edited social media posts. The hauntingly beautiful single “A Mighty Storm” captures those moments when we feel helpless to console those who we care for most in times of crises. The song’s stirring narrative is enhanced by powerful guitar rhythmic accompaniment and rousing ethereal double bass textures that crop up in the second half of the arrangement.

The melancholy melodic, single “Birds Can Write The Chorus” is a dip into the symphony of sounds nature presents daily. Beyond that, it’s a song of acceptance—be where your feet are and enjoy the music all around you. The remaining EP songs are the courageously vulnerable “All I Ever Wanted” and “Hollywood,” which is the first instrumental track Dan and Sarah have recorded. The track showcases their intuitive musicality.

Dead Horses will support its EP with a six-week tour in late February which will include select shows with The Brother Brothers and Kate Rhudy. Since the beginning, the road has been almost a second home for Sarah and Dan. “Connecting with people at shows, and being open together breathes new life into everything,” Sarah notes. Dan concludes: “You can go somewhere and feel like a stranger or a tourist at first, but once you hit the stage, you feel like you’re part of a community.”